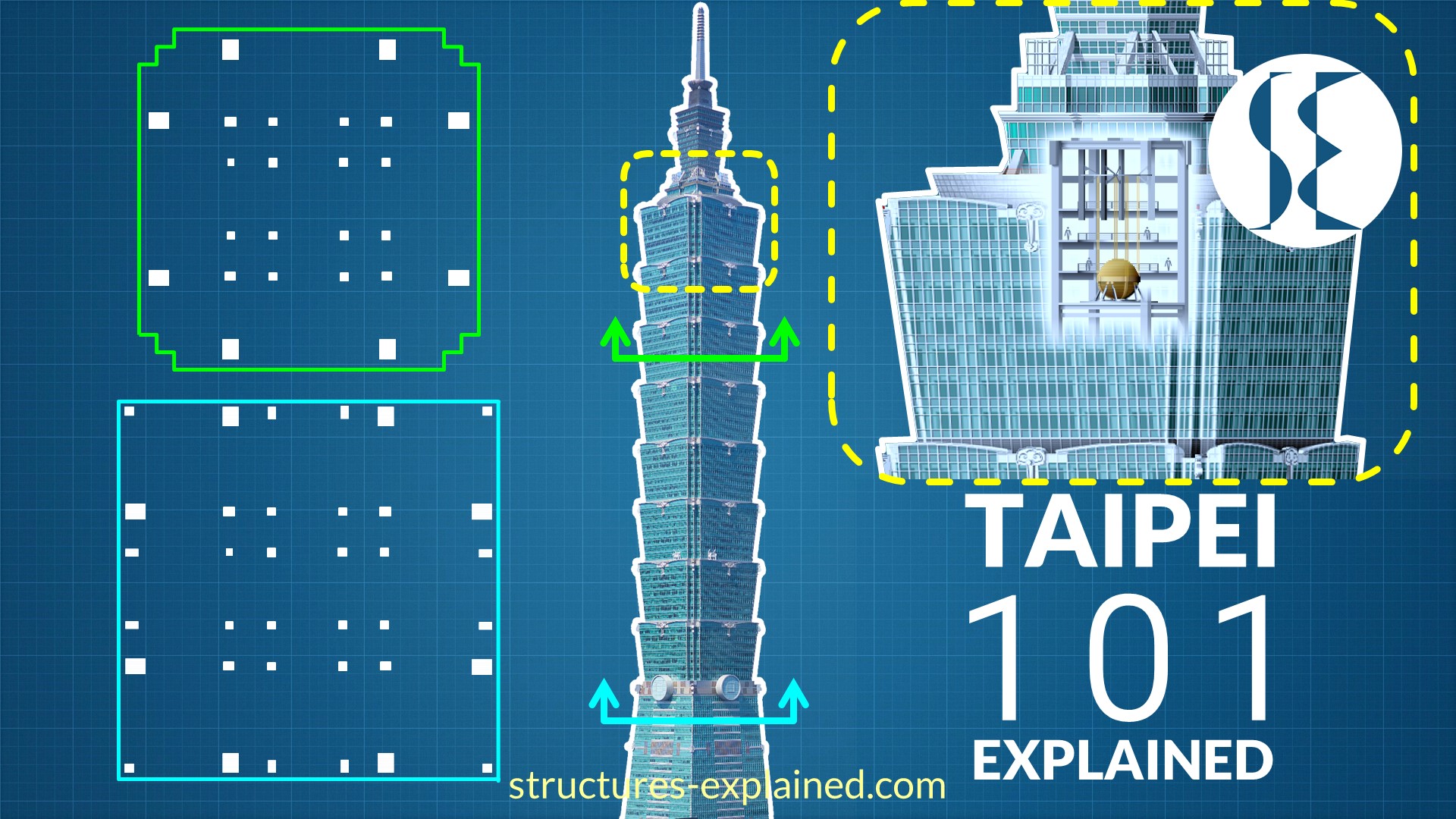 In this post we will be learning about structural engineering behind Taipei 101.

Typhoons, earthquakes, difficult soil conditions, site present near an active fault line, water table just below the surface, all applied to a structure more than half a kilometer tall. Taipei 101 is an engineering and architectural marvel. The structure witnessed an earthquake of magnitude 7.1 during the construction and recently, a category 5 typhoon in the year 2015. Hence the building must be flexible enough to resist an earthquake and stiff enough to resist a typhoon.

The project consisted of a 5 storied retail mall and hundred and one storied office tower. If we see the site in plan above, the yellow portion is for the tower and blue for the retail mall.

Now let us look at the foundation system used for the building. The above image shows building section with ground level and basements for podium and tower.

Soft soil in the form of clay, and stiff colluvial soil is present just below the site of Taipei 101, which has low load bearing capacity. Soft rock in the form of sandstone is present beneath 40 to 60 meters (130 to 200 feet), hence it required mat foundation with bored piles.

The tower required a 21 meter (69 feet) deep basement. Water table at site is 2 meters (6.5 feet) below ground which would create huge uplift forces on the foundation of the building. Hence slurry walls were constructed to lay the foundation below the tower. Slurry walls are deep walls constructed on site to prevent water and soil caving in while construction of foundation and excavation.

These walls surround both the tower and the podium and are 1.2 meters (4 feet) thick and upto 47 meters (154 feet) below ground.

Main foundation of the tower consists of 380 piles of 1.5 meter diameter and 167 piles for podium area. They were spaced 4 meters (13 feet) apart in staggered rows for tower portion. A concrete raft of thickness 3 to 4.7 meters capped the piles and transferred loads from columns and walls above.

Use of steel in the superstructure minimised the building weight which reduced the cost of foundation.

Now let us understand the super structure of the tower.

At the top of 8th module sits a 9th module which has a smaller footprint. This module  supports a spire and contains equipment and an observation deck.

Below the 8 repetitive modules, a 25 story base, shaped as a truncated pyramid is present. This base provides an improved overturning resistance and lateral stiffness compared to a straight block.

The story height of each floor is 4.2 meters and retail floors below are 6.3 meters. The floor is composite steel and concrete, typically 135mm thick (5.3 inch).

Taipei 101 is present in a high typhoon zone which experiences winds of 156 kilometres per hour (97 mph) with 100-year return period. The building is impacted by alternating crosswind forces due to vortex shedding which means wind passing the building separates from the sides producing alternating whirlpools. Large forces can result when the time period of the building matches with the period of vortex formation. These winds can also damage the façade and partitions.

Wind tunnel tests were conducted which showed that sharp corners of a square building produced large cross wind forces. Hence ‘saw tooth’ or ‘double notch’ corners were provided which reduced the wind forces by up to 40%.

For resisting the lateral load from earthquakes and wind a building needs a strong core and perimeter columns.

Let us see a typical plan of the building above level 26. The building has a square core made up of 16 box columns in four lines, which are generally fully braced by moment frames between floors. The braced core is encased in concrete walls from foundation to the 8th level.  The core box columns were filled with concrete of strength 69MPa till level 62.

The building has 8 ‘super columns’ or ‘mega columns’ which are steel boxes filled with high strength concrete. They are present on the perimeter of the building, 2 on each face. These super columns were built up to level 90 of the tower. They were filled with concrete of strength 69MPa from bottom of basement till level 62.

These columns control drift as large portions of drift is created at lower stories due to overturning rotations. The interstory drift and overall lateral motion were limited to Height by 200.

Super Columns were built from 50 to 80mm thick steel plates with welded splices. Highest dimensions of the column are at 3 meters by 2.4 meters and vary along the height of the building.

Internal cross ties resist bulging of the column. Shear studs link concrete and steel together and rebars strengthened the concrete.

The building was designed to be stiff for resisting the wind forces first and then checked for seismic ductility and seismic strength. The steel framing used in the building is Special moment resisting frame also known as SMRF. Ductility was provided by using reduced beam section or ‘dogbone’ detail. Steel moment frames along each sloping face of the building works in parallel with the braced core and outriggers to counter seismic forces. The building is engineered to stay up under a 0.5-g ground acceleration.

Now let us see the typical plan of the tower below level 26.

Below this level, super columns slope with the building’s profile as shown in the section. Two columns of size 2 meters by 1.2 meters are added toward the center of each façade, while each corner is supported by an additional 1.4 meters square, sloping box column.

Main floor girders shown in yellow connect each super column through moment connections with a core corner column, along the same line. Rest of the floor beams are shown in green in these typical plans below 26th level and above 26th level which support the composite floor. We can also see locations of stairs and shaft openings for elevators and utility services.

Now let us talk about Outriggers and belt trusses used in the building.

In structures, outriggers basically tie two structural systems together, which are core and perimeter systems. When subjected to lateral loads, the column restrained outriggers resist the rotation of the core, causing the lateral deflections and moments in the core to be smaller than the system without the outriggers. The external moment is now resisted not by bending of the core alone, but also by the axial tension and compression of the exterior columns connected to the outriggers.

Belt truss as the name suggests, forms a belt around the building connecting perimeter columns. Belt trusses are often provided to distribute the tensile and compressive forces to a large number of exterior frame columns.

In Taipei 101, belt trusses below level 27 are two stories deep at levels 9, 19 and 27. For upper floors, the belt trusses are single story deep, every 8 floors tying main perimeter columns by cross bracing. These belt trusses gather and transfer perimeter weight to two super columns on each face.

Outriggers in Taipei 101 were formed by vertically bracing two adjacent floor girders through occupied space, every 8 floors, just like bamboo joints. Two minor outriggers connect the core’s central columns with sloping I-shaped columns. This floor was dedicated to storage and mechanical equipment as open space is occupied by trusses.

Now let us talk about the Mass Damper used in the building. At the top of the building between 86th and 92nd floors, is a huge pendulum which is called a Tuned mass damper or just TMD. This pendulum counters the wind force and reduces sway of the building in the typhoons. The occupant comfort is also increased during strong winds due to the damper.

This damper uses building motion to push and pull giant shock absorbers to convert motion to heat by forcing fluid through small internal openings. When the building sways the mass will tend to move in the opposite direction. This removed energy from the building due to wind oscillations and reduced movement.

The pendulum is of 726 tons and 6 meters diameter. It is built up from stacked steel plates and weight is equal to 0.24% of the total building weight. Recently a typhoon of category 5 caused the damper to sway a record 100 centimetres or 39 inches.

Two additional 7-tonne dampers control the oscillations for the 60-m-tall pinnacle rising from the hundred and one level. In the event of an earthquake the sudden shock locks the mass for safety during seismic events.

Taipei 101 is a very special building in the world of engineering and architecture. Its ability to take on every challenge thrown by nature is remarkable and it will remain an icon for years to come.

Can Avengers Tower be Built in Real World?