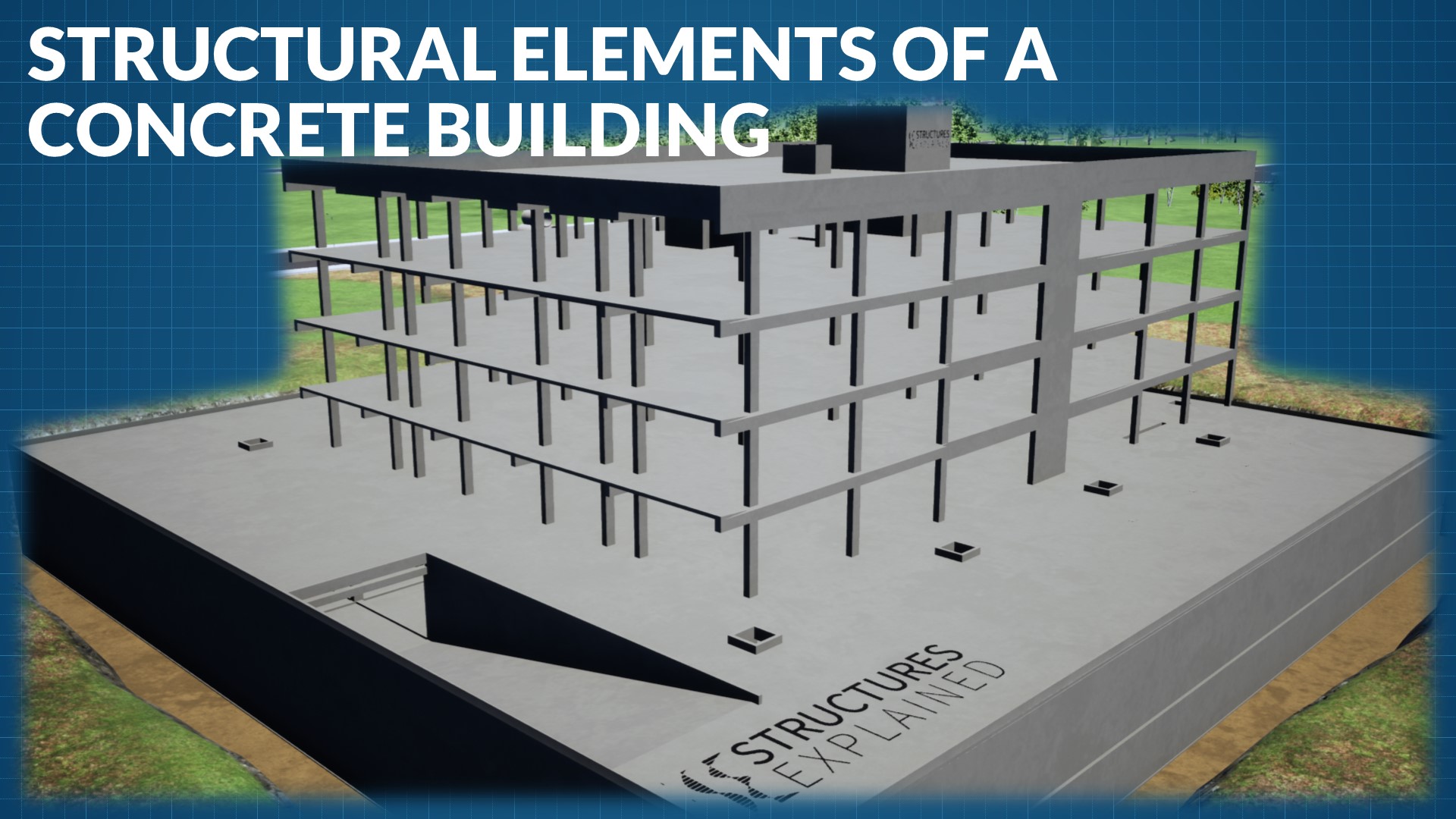 Starting from the sub structure, first we have is the Plain cement concrete, also termed as PCC. It is a low strength mixture of cement, fine aggregates (usually sand) and coarse aggregates. The main purpose of PCC is to provide firm, rigid, non-porous, impervious and leveled base for RCC footings, ground beams and Slab on grade.

After PCC, foundation is laid which takes loads from above and transfers it to the ground below it. Various kinds of footings are used in accordance with loading, site conditions, soil properties and design.

In this building we have isolated footings, combined footings which holds 2 or more than 2 columns, Raft or mat footings and finally strip footing which in this case is provided to basement wall.

Structures also use Pile foundations with different number and arrangement of piles having a pile cap over it. Raft footings can also be combined by piles below it or thickening below columns, if required by design.

Next, we are looking at columns below the ground also called as column neck as their length is shorter. They are embedded in soil and require appropriate waterproofing around them.

After that we look at ground beams which run from column to column. These beams also are protected by PCC and waterproofing as they are in contact with soil.

After ground beams comes Slab on Grade or S.O.G. As the name suggests SOG is laid on the grade or ground after PCC or waterproofing. In this case SOG acts as basement slab.  Generally, sab on grade is not connected to column beam framing and directly rests on the well compacted ground below it.

Next, we are looking at podium. Podium is generally required for landscaping, internal vehicular movements like cars and bikes and even fire trucks in case of a fire. It may house ducts for ventilation to the basement.

Next, we will talk about pits, manholes and trenches for drainage purpose. These components may be casted in concrete, brickwork or may come as precast units, as per requirement. These elements also require PCC at bottom and proper waterproofing as they may be in contact with soil.

Then comes concrete plinths or concrete pads. These elements support heavy machinery or equipment such as generators, water pumps, transformers and provide a firm base to them. Concrete pads can be reinforced or unreinforced as per design requirement and can be casted on site or come in precast unit with the equipment.

This ends our substructure and now we will see superstructure members. First we see columns which are vertical load bearing members on which beams and slabs rest. Columns transfer the gravity loads and lateral loads from wind and earthquake. Columns can exist in various shapes and sizes according to architectural and design requirements. They can be T shaped, L shaped, circular, rectangular or square shape.

Next, we will learn about various types of walls present in superstructure. First comes Shear wall. These walls are part of lateral load resisting system which counter the wind and earthquake forces. Shear walls are placed at appropriate locations of the building by design and they start right from the foundation of the building.

A combination of shear walls connected rigidly with each other is called core wall. The core walls generally enclose elevators, stairs or utility services in them. Core walls are also part of lateral load resisting system of a building.

Lastly under the walls category comes Upstand walls which are reinforced concrete walls usually of lesser height and thickness and having one end free. These walls are generally present as parapet walls or around openings or on the ground where some amount of retention is required.

Slabs are the horizontal surface which take the load on them and transfers it to the beams and columns. Slabs in superstructure are also called suspended slabs as they are supported by beams and columns in air and not rested on ground.

There are various types of slabs based on structural load transfer mechanism. Based on design, the slab can be broadly categorized into 2 types first is framed system and second is flat slab system. In framed type arrangement the slab rests on beams. These beams may be further divided into primary, secondary and tertiary beams.

In this building we also have a ramp which connects Basement to podium and can take vehicular traffic. Ramp is also a part of slab system, supported on beams and columns or walls.

Second category is the flat slab system in which the slab directly transfers loads to the column having drops or without it. The drops above the columns prevents punching of columns in the slab and provides stiffness above that area. If the thickness of slab alone is enough to resist the shear, the drops can be removed. Flat slab also can be accompanied with beams at required locations such as on the perimeter of the building and around the openings.

Last but not the least comes stairs which can be casted at site or can come in precast panels. They can be of various types such as L shaped U shapes, spiral, Curved as per requirement. The stairs can be enclosed in a core wall like in this case or rest on columns and beams as per design.

I would also like to mention openings as a part of structural components as openings break the load path and extra care must be taken while providing size of openings and reinforcement around them. Openings are mainly governed by architectural or MEP requirements.