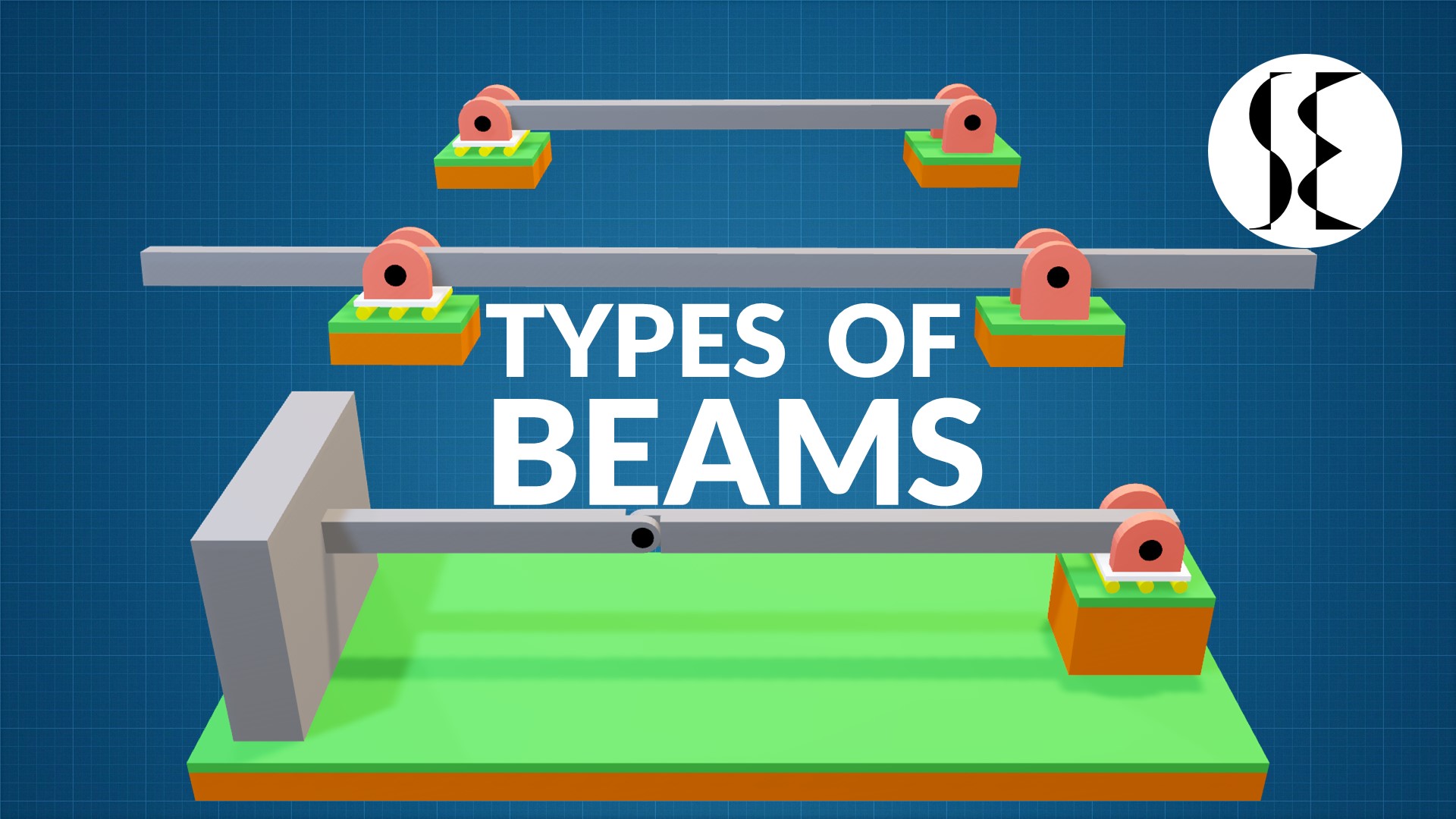 In this post we will be learning about various types of beams used in engineering mechanics and their deflected shape on uniform loading.

There are basically 6 types of beams used in mechanics. Beams used for finding out reactions on support are assumed to be massless and the support, if pinned or roller, are frictionless. This is assumed to for the sake of easy calculations.

Starting from the simplest of the beams, the simply supported beam rests on a pin and roller support. Pin support allows rotation and roller support allow rotation and lateral movement. The deflected shape of the beam on loading is shown in white dashed line. This beam has got 3 unknown reactions which are vertical reactions at both the support and a horizontal reaction at pin support. We have 3 equilibrium equations which are summation of forces in vertical direction is zero, summation of forces in horizontal direction is zero and moment about any of the support as zero, to find the 3 reactions. Hence it is called a statically determinate beam.

If the overhang is from both the ends, then the beam is supposed to be called, double overhang and the deflected shape on uniform loading would look something like this. These arrangements are also statically determined with 3 unknowns and 3 equilibrium equations.

Next is, Fixed beam, which has fixed or rigid supports from both the ends. Deflected shape due to uniform loading will look something like white dashed line in which fixed supports will not rotate. Fixed support gives all 3 reactions which are horizontal, vertical and moment at both supports hence a total of 6 unknowns. These unknowns cannot be found by 3 equilibrium equations hence the arrangement is called statically indeterminate.

Next we will see a cantilever beam, which is fixed on one side and free on the other side. Deflected shape due to loading will look something like white dashed line. This beam has got only 3 unknowns hence they can be found by equilibrium equations making this beam statically determinate.

But what if I tell you that a propped cantilever can be made statically determinate? This can be possible by introducing an internal hinge or pin. Internal hinge allows free rotation hence moment at that point is zero. Beams to the left and right of the internal hinge can be treated like 2 separate beams for calculations. Deflections due to uniformly distributed load in this case would look something like white dashed line. The slope abruptly changes on each side of the hinge. In the real world a shear connection between 2 beams can be assumed as an internal hinge.

Next comes a continuous beam which has 2 or more than 2 spans. The support at the ends may be fixed, pinned or roller. The ends can be overhanging or supported. Deflected shape of the continuous beam on loading will look something like the white dashed line. Point to be noted here is that the intermediate support will not allow rotation of the beam hence there will be some amount of bending moment present at that support. As the unknown reactions in a continuous beam are more than 3, the reactions cannot be statically determined.

Also read 👉 Types of Support | Support Reactions in a Beam