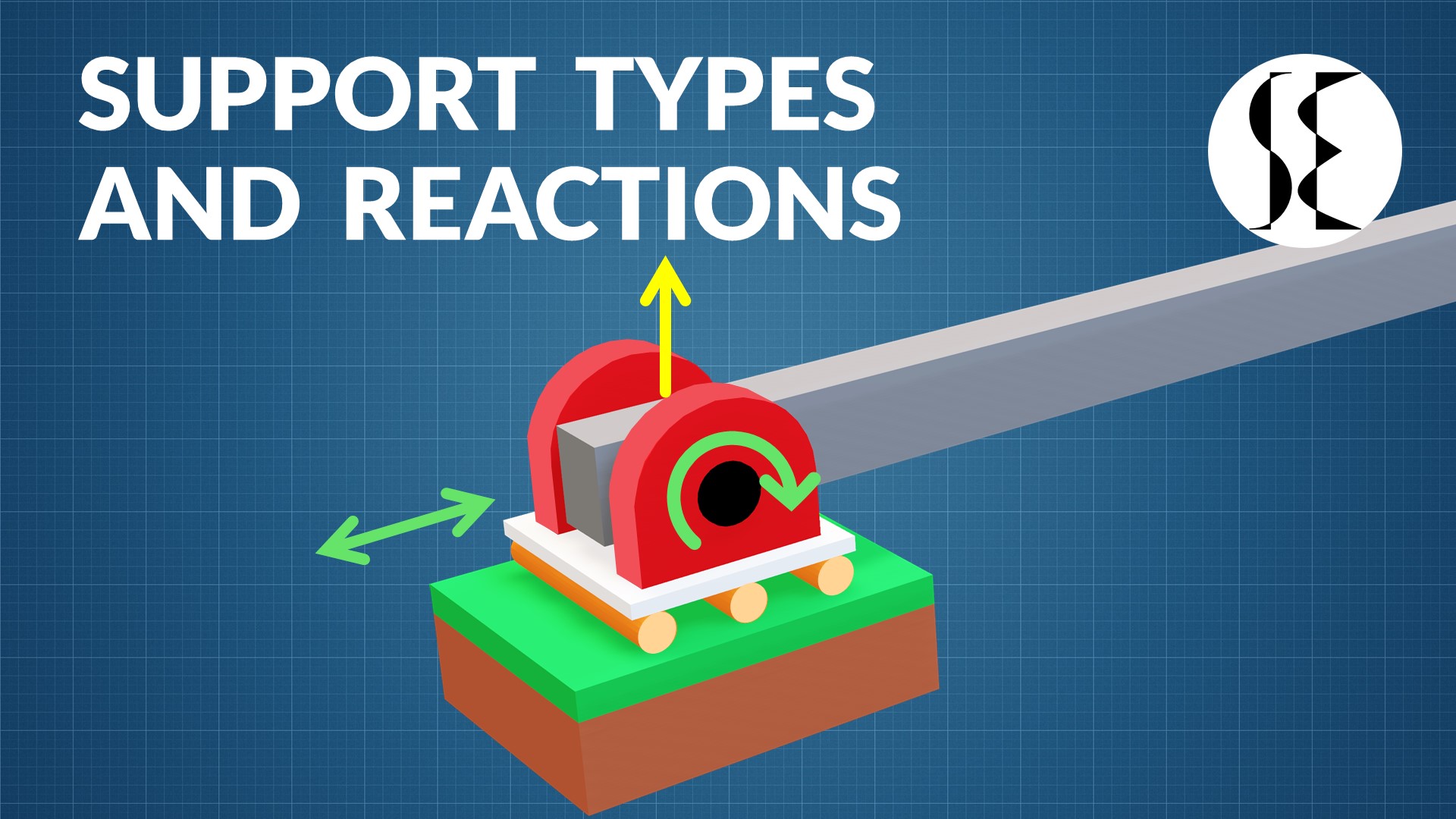 In this post we will be learning about types of supports used in beams and reactions produced in them on loading. In engineering mechanics supports are basically of 4 types. Simple support, Roller support, Pin support and fixed support. When the beam is loaded these supports resist the load by producing reaction. These supports allow or resist vertical reaction, horizontal reaction or a moment depending on type of support. Let us have a look at them one by one.

First let us understand what a reaction is. Let us consider a block of concrete lying on the ground. In this arrangement, the block is applying a force of mass times acceleration to the ground. In return, the ground applies equal and opposite force as per Newton’s third law of motion. This force is called Reaction.

Now let us see various types of supports and the reactions they generate when applied by force.

First we will see a simple support. In this support the structural member simply rests on an external frictionless surface. This kind of support allows rotation and horizontal movements but not vertical motion. Hence, it produces only one reaction to the applied force which is perpendicular and away from the surface.

Next we will see Roller Support. This support has wheels on the bottom and a hinge to attach members in it. The surface can be horizontal, vertical, or sloped at any angle. While assuming this support in calculations, all surfaces and the hinge are assumed to be frictionless.

This kind of support allows lateral movement and rotation but does not allow vertical motion. Hence, it just produces a vertical reaction to the force applied. Value of moment will be zero at roller support as it allows rotation. A roller support is generally represented in mechanics with a triangle having circles below it or just a circle. This kind of support is found in large bridges, which allows thermal expansion and contraction of the bridge.

Next comes pinned support. This support is fixed at the bottom and has a hinge to attach members in it. The surface to which support is attached can be horizontal, vertical, or sloped at any angle.

This kind of support allows only rotation and restricts horizontal and vertical movements. Hence, it produces two reactions to the applied force. One in horizontal direction and other in vertical direction. Value of the bending moment will be zero at pin support as it allows rotation. Pinned support is generally represented in mechanics with just a triangle. This kind of support is also found in bridges and trusses.

So, will the pin or roller support always allow rotation? The answer is, not necessarily. If the roller or pin support act as intermediate support in a continuous beam, then it will resist the rotation. In the above illustration the continuous beam is loaded uniformly. Dashed lines show the deflected shape of the beam where end supports allow rotation but middle support resists the rotation. Hence zero moments at ends and some value of moments in the middle.

Next we will see rigid or fixed support. This kind of support restricts any kind of motion hence we have all 3 reactions which are horizontal reaction, vertical reaction and a moment. This type of connection is used in concrete framed structures or in this case a cantilever beam. They are represented as a single line for structural members and a hatched vertical line for fixed support.